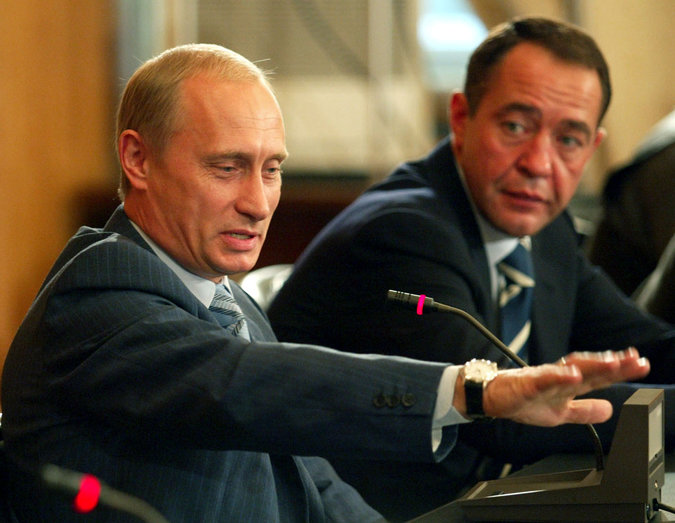 He returned, though, after Mr. Putin assumed the presidency for a third term. In October 2013, he took over Gazprom Media, the subsidiary of the energy giant that through a complicated ownership structure is controlled by one of Mr. Putin’s confidants, Yuri V. Kovalchuk, the main shareholder of Bank Rossiya. Mr. Kovalchuk and Bank Rossiya each face sanctions by the United States for their ties to Mr. Putin. Within two months, Mr. Lesin oversaw the acquisition of Prof-Media, a subsidiary of one of Russia’s richest industrialist, Vladimir O. Potanin. Prof-Media owned television networks like MTV Russia, as well as radio stations and magazines. The deal, reported to be worth $600 million at the time, was seen as the Kremlin’s effort to bring even more independent media outlets under state political and financial control. “There is a danger that Lesin will use his administrative resources not only to serve the interests of his bosses, but also to settle old scores,” a columnist, Yulia Latynina, wrote in The Moscow Times in December 2013. Mr. Lesin did clash with the remaining vestiges of independent news media. Aleksei A. Venediktov, the editor of the radio station Ekho Moskvy, which is partly owned by Gazprom Media but ostensibly independent, said Mr. Lesin had invited him to dinner at one of Moscow’s fanciest restaurants and pressed him to dismiss several journalists who appeared on the air or on the station’s website, including Ms. Latynina. Mr. Venediktov successfully resisted. Many attributed his departure from Gazprom Media to the fight with Ekho Moskvy, but Mr. Venediktov said he believed that Mr. Lesin’s abrasive character and his handling of the acquisition of Prof-Media had brought him into conflict with Mr. Kovalchuk. “Lesin made enemies of all the heads of the federal TV channels, all the heads of advertising agencies and all media owners with his policies,” Mr. Venediktov wrote in an email.

Mr. Lesin’s return to an influential position atop Gazprom Media renewed attention on his own wealth. In July 2014, Aleksei A. Navalny, the opposition leader whose Foundation for the Fight Against Corruption has become one of the most potent opposition organizations, published records that showed Mr. Lesin’s acquisition of several expensive homes in and near Los Angeles to be seemingly beyond the means of a government minister for much of the previous 15 years. Three years earlier, Mr. Lesin had incorporated a company in California, called Dastel, primarily to buy real estate. According to a deposition in a lawsuit involving his son, given by the corporation’s only officer, Ilya Tsipis, “various members of the extended Lesin family” lived in the properties the company bought. A second company, HFC Management, was incorporated the same year in the name of his daughter, Ekaterina, and another, called Dastel Holdings, was formed in 2013. The three companies bought two homes in Beverly Hills, at a cost of $13.8 million and $5.6 million, and another in Brentwood for $9 million. Mr. Lesin’s son, Anton, began to make his mark in Hollywood not long after. The son, who Anglicized his name to Lessine, and a partner, Sasha Shapiro, formed a film-financing company called Media Content Capital. And in 2012, they acquired a controlling stake in QED International, a film production and distribution company founded in 2002 by Bill Block, for $25 million. The company has since produced a series of major movies such as “Fading Gigolo,” with John Turturro and Woody Allen; “Fury,” with Brad Pitt; and, most recently, “Dirty Grandpa” with Robert De Niro and Zac Efron. The revelations about Mr. Lesin’s investments in Los Angeles came at a time of heightened animosity toward the West as a result of the war in Ukraine. With senior Russian officials and businessmen facing sanctions by the United States and Europe, Mr. Putin intensified his warnings that businessmen should keep or return their fortunes to Russia. Mr. Navalny’s disclosures also had an impact in Washington. Vladimir V. Kara-Murza, a prominent journalist and opposition activist in Russia, said he passed on documents about Mr. Lesin’s properties to members of Congress as part of a campaign to persuade the United States to impose sanctions against more officials. Senator Roger Wicker, Republican of Mississippi, publicly called on the Justice Department to investigate what he said was suspicion of wrongdoing under the Foreign Corrupt Practices Act and questioned Mr. Lesin’s ties to Mr. Kovalchuk, whom the Department of Treasury identified as “the personal banker for senior officials,” including Mr. Putin. More than four months later, an assistant attorney general, Peter J. Kadzik, replied that the matter had been referred to the Justice Department’s Criminal Division and the F.B.I. Then nothing happened. A law enforcement official, speaking on the condition of anonymity to discuss internal deliberations, said the referral was a formality, suggesting that no investigation followed. Julie Davidson, the director of the Kleptocracy Initiative at the Hudson Institute in Washington, a research organization that works to expose the investment of ill-gotten gains by foreign officials, expressed puzzlement that the allegations against Mr. Lesin did not appear to have prompted an investigation. “There is no question that the U.S. has become a relatively comfortable haven for questionable fortunes,” she said. Although no evidence has surfaced that implicated Mr. Lesin in any wrongdoing, the scrutiny appeared to have an effect in Russia. Mr. Navalny publicized the Justice Department’s reply to Senator Wicker on his website on Dec. 14, 2014, mocking Mr. Lesin as a “patriot of California real estate.” Within days, Mr. Lesin departed Gazprom Media, citing personal reasons.

In 2015, he retreated from public view. He regularly traveled to the United States on a tourist visa, visiting four times in the first 10 months of the year, usually to Los Angeles, according to a record of his travel disclosed by Mr. Navalny and confirmed by the United States Customs and Border Protection service. Mr. Lesin arrived one last time in Los Angeles on Oct. 21, only two weeks before his death. Mr. Lesin, previously twice married, began a new relationship with a woman, Viktoria Rakhimbayeva, a model from Siberia, Mr. Aven said. “He really was in love,” he said. On Sept. 25, she gave birth to a daughter, Mr. Venediktov told his radio audience on Ekho Moskvy after Mr. Lesin’s death. “When I learned of his death, my first thought was about the baby, actually,” Mr. Venediktov said. “This is a question of sympathy because, well, he’s dead and gone, but the girl with the baby — how is she?” Even though he dropped from public view, his troubles at Gazprom Media followed him to the United States and were raised in 2015 in a lawsuit involving his son’s production company. In late 2014, Mr. Block reached an agreement to depart QED International, leaving the entire company to Mr. Lessine and Mr. Shapiro. Last April, they sued Mr. Block for trademark infringement and unfair competition, accusing him of undercutting the company. Mr. Block’s lawyer, Marty Singer, said in a statement at the time that Mr. Lesin was one of the company’s principals and said the lawsuit stemmed from a shortage of cash caused by Mr. Lesin’s departure from Gazprom Media and the reports of an investigation by the Justice Department. The lawsuit was settled — with no terms disclosed — on the day Mr. Lesin’s body was found.

Little is known about the last days of Mr. Lesin’s life. One of his friends and former business partners, Sergei A. Vasilyev, told the newspaper Kommersant that Mr. Lesin had met friends from Russia who lived in Washington and was drinking heavily on the night of Nov. 2, a Monday. Mr. Vasilyev, as well as Mr. Aven and others who knew him, said Mr. Lesin was known as a heavy drinker who would sometimes behave recklessly when intoxicated. “The only thing I can tell you is that when Misha has failures,” Mr. Vasilyev said, referring to Mr. Lesin familiarly by the diminutive form of Mikhail, “there were instances where he fell and caused involuntary injury to himself, including quite heavily.” The autopsy did not name the cause of the blunt trauma, leaving an open question whether it was a beating, a fall or a vehicle accident. According to Mr. Vasilyev’s account, which he said was based on information from the Foreign Ministry, Mr. Lesin went to a liquor store on the morning of Nov. 3 — the day of the dinner he was to attend — and returned with alcohol to the hotel where he was staying, the Dupont Circle Hotel. It was that day when, Mr. Aven said, he called and sent a text message, but received no response. Mr. Lesin was visited in his room on the night of Nov. 4 by a security guard who, finding him drunk, tried to help him into bed, Mr. Vasilyev said, but Mr. Lesin resisted. The next morning he was found dead in his room by a cleaner. “How it is possible he did not call a doctor, the police, anyone?” Mr. Vasilyev said of the security guard. “I do not understand.” A sales representative at the hotel said no one there would comment on his death. The medical examiner tested for alcohol in his blood, as a matter of routine. A spokeswoman would not discuss the details of those tests, citing privacy, but alcohol was not listed as a contributing factor in his death, only the trauma. The police here continue to treat Mr. Lesin’s as a natural death, though the criminal division is in charge of the investigation. Neither the F.B.I. nor the Justice Department has taken a role in the investigation, according to officials from both agencies, who spoke on the condition of anonymity to discuss an unresolved case, suggesting that it was being investigated as an untimely death but not a federal crime. One of the officials said a security video showed Mr. Lesin returning to his hotel in a disheveled state, suggesting he had been in an accident or altercation the night of Nov. 4. In addition to the blunt trauma to the head, Mr. Lesin’s body had bruises on the neck, torso, arms and legs, but the cause of those was not clear. The handling of the inquiry has raised questions in Russia. The medical examiner’s office completes most autopsies within 90 days, but Mr. Lesin’s took longer, as officials carried out a rigorous series of toxicological tests for poisons to be certain to rule out that sort of foul play. (The joint statement by the office and the Metropolitan Police also misstated Mr. Lesin’s age, which was 57, not 59.) In March, Russia’s prosecutor general asked the Justice Department for more information about the case, according to an embassy spokesman, Yuri Y. Melnik, but according to him and a spokeswoman for the Foreign Ministry, neither the police nor federal officials have provided answers. In the febrile, largely virtual world where opposition to Mr. Putin thrives, Mr. Lesin’s mere presence in the United States has provoked conspiracy theories. One version held by Mr. Putin’s critics claimed he was silenced before he could cooperate with federal authorities investigating corruption. Another theory suggested, fantastically, that he might not be dead at all but in witness protection. Officials here dismiss these as ludicrous. (A final notation of his departure in December was a clerical record closing out his travel record, a spokesman for the customs service said, not evidence he had departed the country, as was reported widely in Russia.) The uncertainties are partly why theories about Mr. Lesin’s death have not fully subsided. Many still suspect a crime, carried out by enemies in Moscow, but Mr. Aven scoffed at that, saying they had met in Moscow only weeks before they were to meet in Washington. “If anything was done to him,” he said, “why would anybody do it here?” Continue reading the main story